A friend of mine, Piotr Klin, is the fastest Masters level cyclist in Poland (as proven during last weekend's National Championships), the current silver medalist of the Masters World Cup, and one of the fastest people on the bike that I know in person. He is taking on the next challenge this Sunday - the ultimate cycling endurance test, known as the hour record attempt.

In simple words, the hour record attempt is about covering as long distance as possible within one hour, on an indoor bicycle track. Riding a track bike, i.e. fixed gear, no breaks, no water, no eating, around a 250m wooden velodrome — you can already imagine how mentally challenging it can be. And when I tell you that the aim is to beat the national Elite record and world Masters record, which would require Piotr to ride over 50km (within one hour), you should get the idea of what kind of a dreaded nightmare it is. 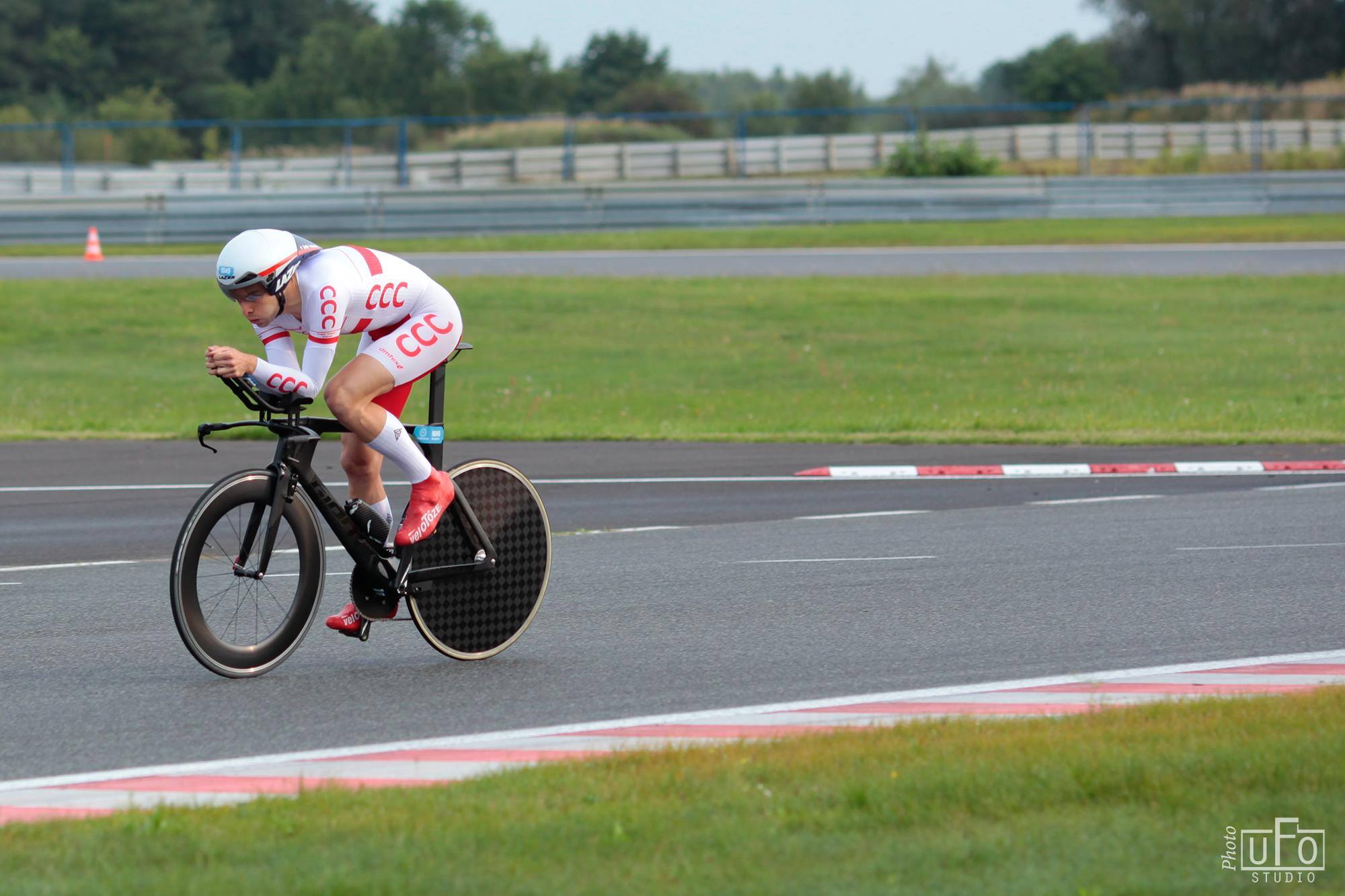 In order to succeed in such an attempt, not only the extraordinary physical and mental form is required. Aerodynamics of both the rider and the bicycle play a very significant role too. Piotr is a mechanical engineer and he works on aerodynamics in the automotive industry, so he realizes the importance of a streamlined airflow around the body and the bike very well and is able to utilize his knowledge to improve the results. To the extent of 3D-printing some bike components... 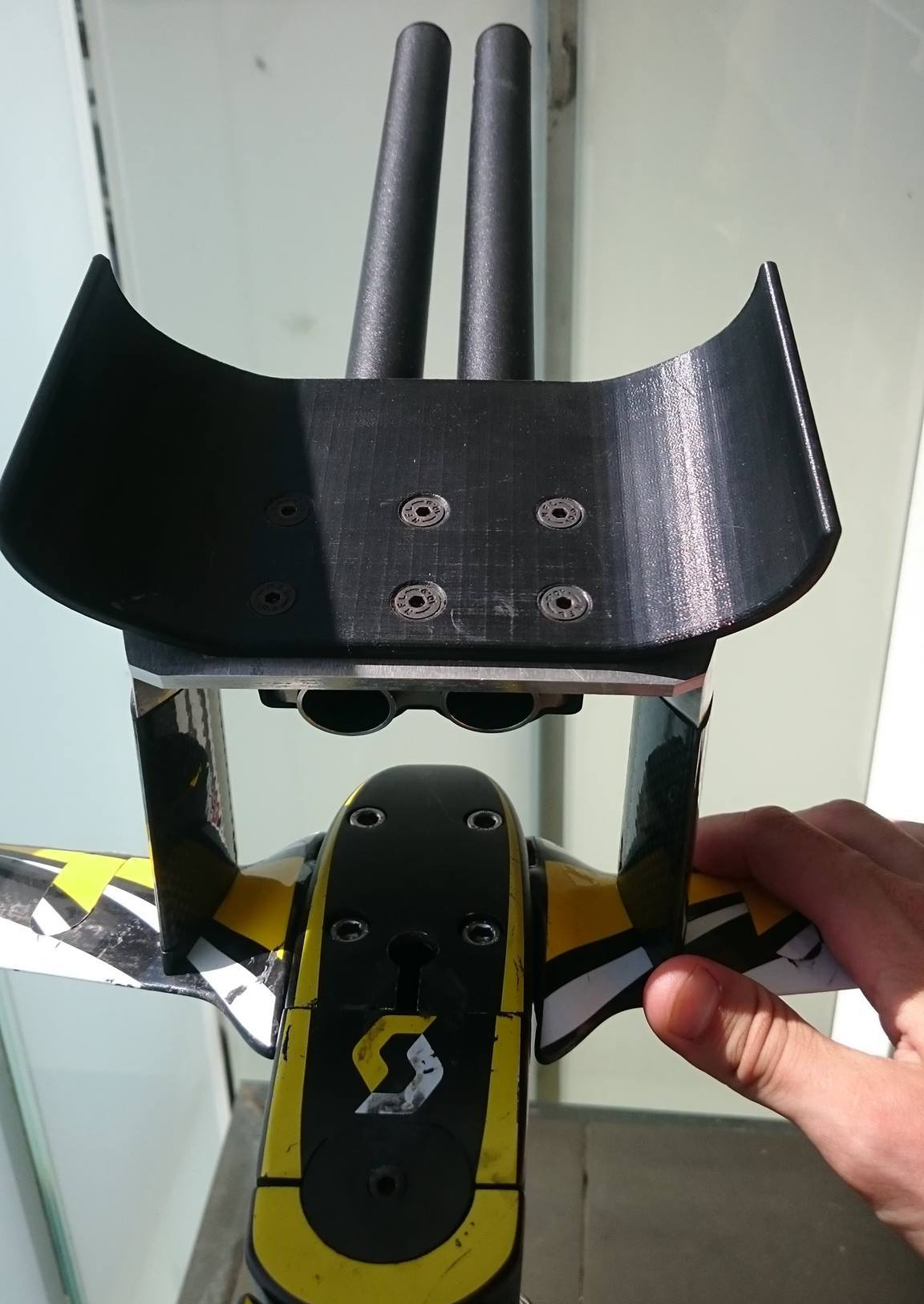 Last but not least, aerodynamics depend heavily on the weather conditions. Namely, on the air density (often marked with a Greek letter rho – ρ), which is a factor of air pressure, relative humidity and temperature. The higher the air density, the more difficult is to travel through the air. Even if its impact is unnoticeable in daily life, in competition, especially at relatively high speed over a long time, it makes a significant difference. Let me just point out that for an hour attempt, just a 2-3% change in air density could alter the resulting distance by up to 300-400m, which can mean winning or losing.

Even if the date for the attempt was set and the velodrome was booked a couple of months ago, the precise time of day when Piotr would start was yet to be decided. We developed the simple weather station to figure out the air density at the velodrome and the optimal attempt time.

Plus, the hour record attempt takes place on the 19th of August, and it was the end of June when Piotr asked me to do it :) Given that we'd like to gather a couple of weeks worth of data before deciding on a start time, the device should be ready within days.

Now I need to stress out that I'm not in any way affiliated with or sponsored by Pycom (ok, that's not counting the WiPy board I got a long time ago from Jose Marcelino ❤️), but simply put, to make a working prototype within a couple of days, it was the easiest for me to leverage my MicroPython experience and loads of existing code I once wrote to do this new project.

The expansion board also provides a battery connector and the microSD card slot. It drains some extra current for battery level measurement, and that could be optimized on a custom circuit board, but it's a trade-off for having all the goods mentioned before. 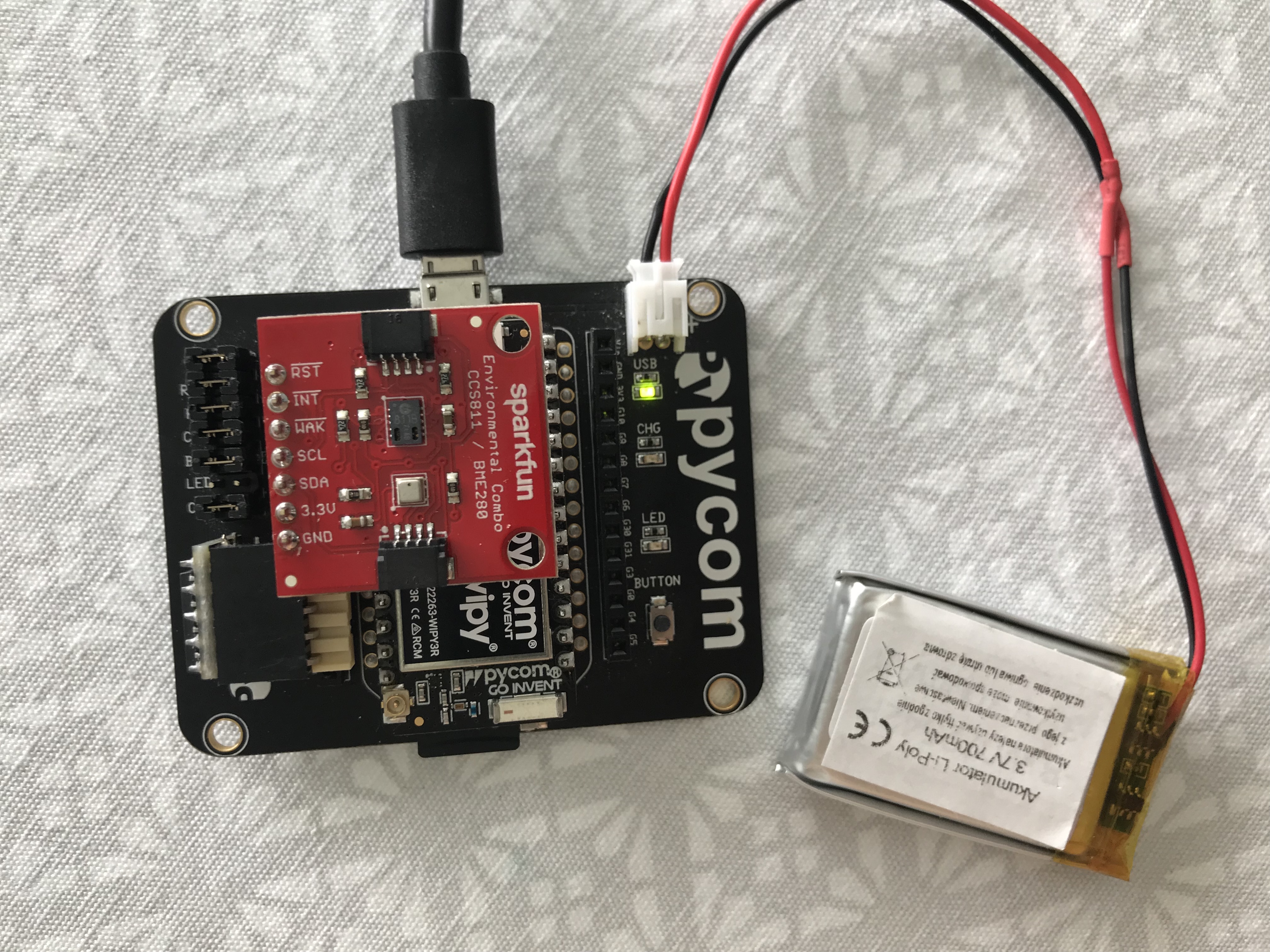 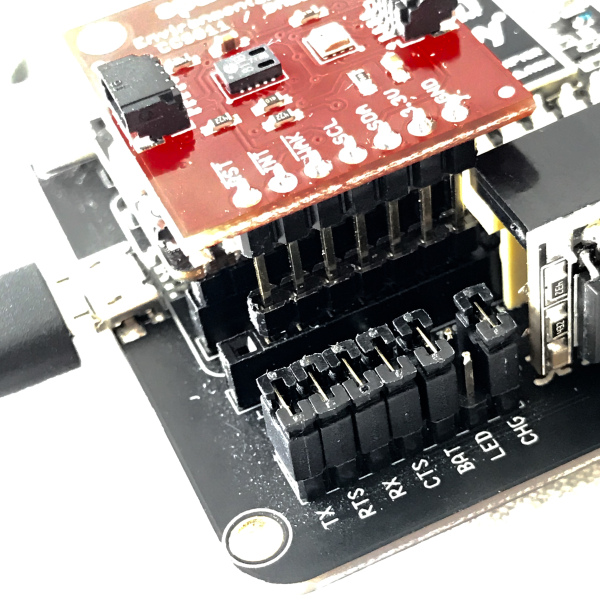 Fitting the BME280 breakout board was not a simple task, because I got the version with an extra CCS811 sensor that used 7 pins in total, but I finally had the excuse to use the weirdly looking elevated goldpins that I once bought for a no good reason. Needless to say, my RTC module also required some extra wizardry to fit on the expansion board, but at the end of the day, it is possible to connect any two interfaces with a finite number of adapters.

I was lucky to find a MicroPython BME280 library that I ported to Pycom MicroPython with just a little effort, so the core functionality was a no-brainer. Well, not. The sensor obviously reports only the raw values of temperature, absolute air pressure and relative humidity. The air density still needs to be calculated. Piotr shared a spreadsheet with me: 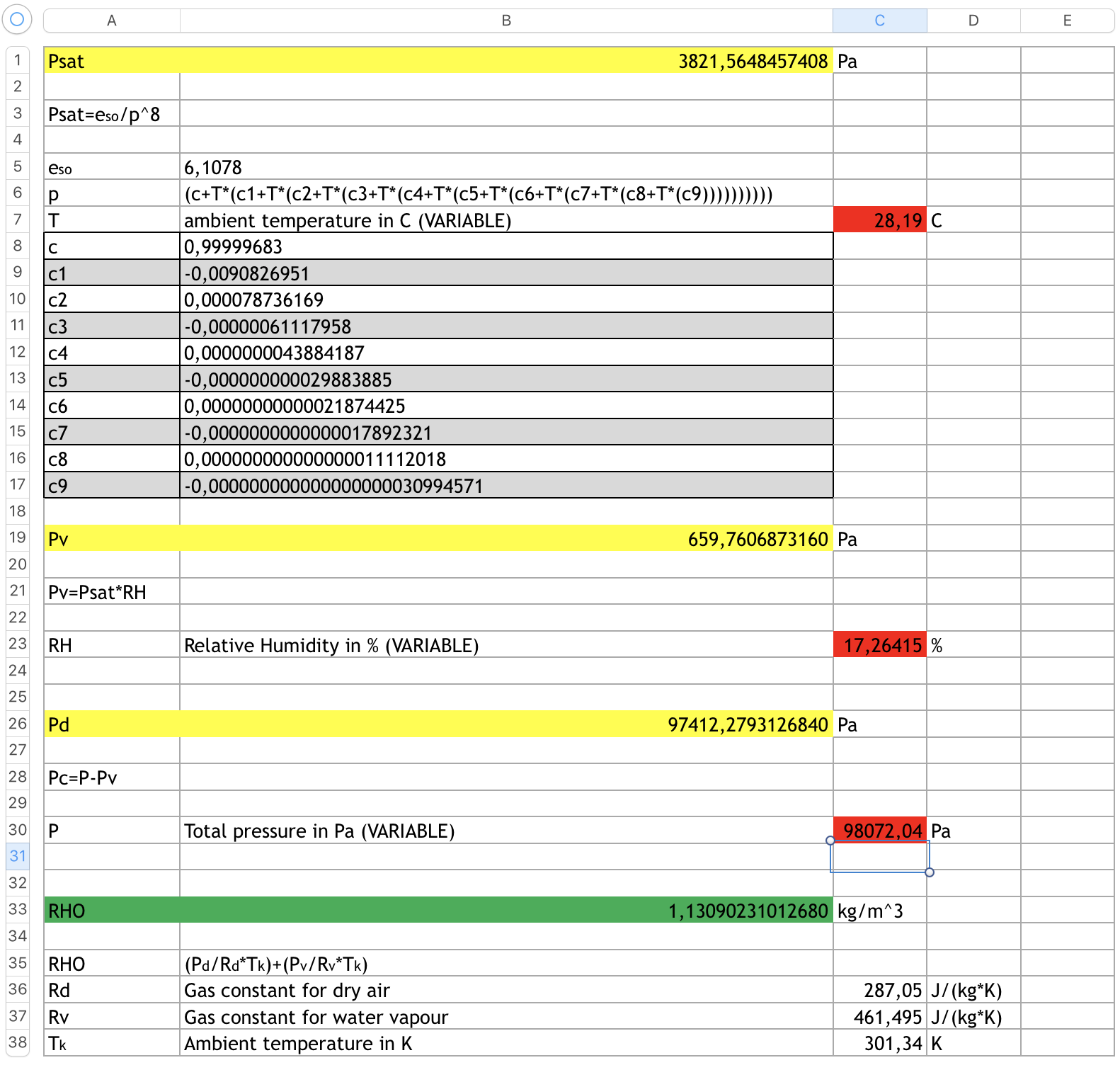 All I needed to do was to write it in Python and verify that it outputs the correct values. Check.

In order to achieve the proper measurement resolution, we decided to capture the data every 10 minutes. Now should the device upload data points one by one to the server, the WiFi would drain the battery in a couple of days at most. Since we didn't need a real-time information on weather conditions, it was okay to upload the data once a day (or more precisely, once every 144 measurements, which is 24 hours times 6 per hour), and otherwise keep the WiFi radio turned off.

With a native Pycom support for the microSD card, it was a piece of cake to store measurements between uploads in a text file on the card. Already uploaded data points are kept on the microSD card for offline access and for backup purposes.

The problem with uploading once per day is that the device doesn't know the time between measurements. The real-time clock on Espressif ESP-32 chip (which is the heart of Pycom devices) is not powered during deep sleep, so when device wakes up 10 minutes after last data upload, it's back to 1970. So when it comes to keeping time during sleep, Espressif is a BYOC (bring your own clock) platform.

The time is synced once per day (during data upload), it is kept in the external RTC module (powered with a separate battery), and it's used for timestamping intermediate measurements.

No fancy stuff here, I went with good old InfluxDB for storing data and Grafana for visualization. It's good enough, looks nice and clean and can be up and running within minutes. 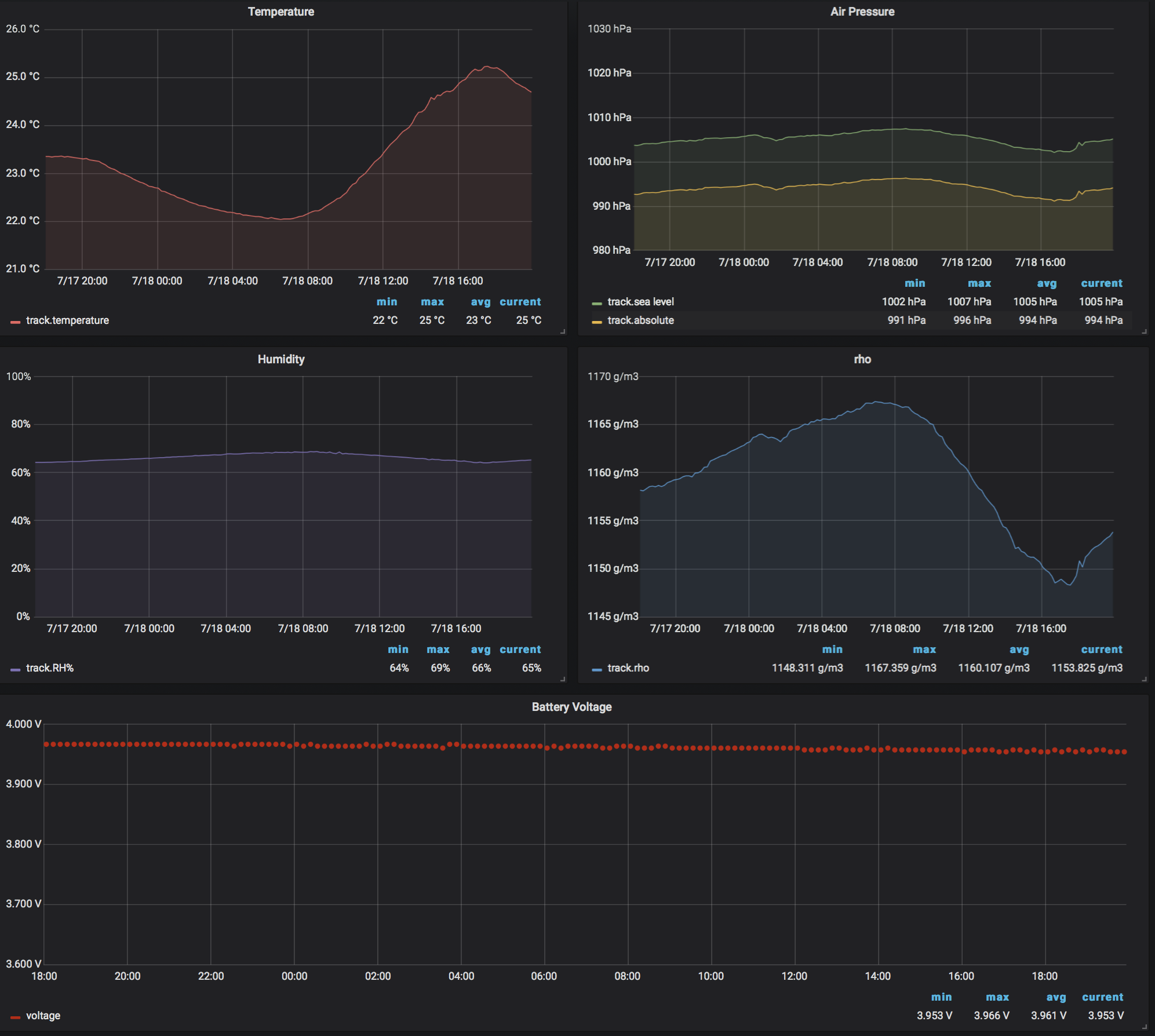 After proving that prototype works stable at my home, I tested it on the velodrome. Thankfully, it happened during Grand Prix Poland, with lots of people on the track, and, as it turned out, a broken WiFi. I realized that the device tried to connect for too long, then it got reset by a watchdog (that was set to 60s) and it repeated the same thing again until it managed to upload the data successfully (which didn't happen in a couple of hours).

Trying to connect to WiFi repeatedly over a couple of hours is, of course, deadly to the battery, so I needed another trade-off to save the battery and the data, to some extent. I reworked the code to try to upload the data only once, and on failure don't repeat, but just store the data on the SD card and move on. This way it would skip a day worth of measurements, but would still work and gather the data, possibly the next day the WiFi would be up again, and I could access the missing data offline by copying them from the SD card.